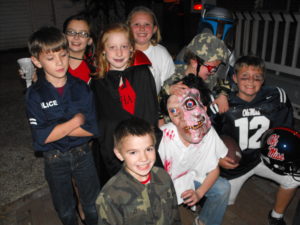 Last month, at a party for one of Jack’s friends: a sunny fall day, a rented jumper humming with activity in the back yard, parents speaking with each other in the distracted way we do while trying to keep an eye on our kids, too. One of the mothers spoke with the father of the birthday boy—a single dad, hard-working, doing his best to atone for a decade of indulgences—in a way that seemed surprisingly familiar. “Know each other long,” I asked her later, while we prepared plates of hot dogs for our kids.

“Shoot yes,” she said as she placed chips and grapes on her daughter’s plate. “He and I went to Sunday school together, school together, same neighborhood growing up. I suppose we saw each other almost every day of our lives until college.”

She went to college, graduated, worked for a while and married; he dropped out, moved away, started working construction and living hard. She has reaped wisely the rewards of a conventional life; prodigal years have etched themselves into the sad lines of his face. Yet when he and his son moved back to West Point, he found himself able to renew friendships quickly. I found myself wondering, briefly, what happened to the people with whom I attended high school. There are two sets of friends: one from Alexandria Senior High, the other from LSMSA. I doubt I would recognize many of the former by name or face—I certainly don’t have any facebook friend requests from them.

So I have no idea what life would be like if I returned to the place where my parents still live. I catch whiffs about their goings-on from my parents from time to time. I suspect that most of them stayed in Alexandria. I also suspect that I have as much in common with them now as I did twenty-five years ago, which isn’t much. Which makes me wonder two things: what is it I am missing, and why don’t I write letters or facebook to see what they’re up to?

I’ll probably never know what I’m missing, as I doubt that I will return to Louisiana to live.  I sometimes wonder what my own children will experience. Will they go to college, see a little of the world, decide that a small Mississippi town is best after all? On one hand, I want them to want more than that, want them to play professional sports or cure cancer or win a Pulitzer Prize—none of which is likely to happen in West Point. On the other, of course, I am as selfish for the kernels of attention they offer as a dragon is of its hoard, and I am becoming more and more provincial with age. I get nervous driving in traffic. I have no idea why anyone would want to live within fifty miles of Atlanta. Traveling in Europe, once a heartfelt aspiration, now means less than taking my kids on a field trip or a soccer game. “I have traveled a great deal in Concord,” Thoreau said.

Why not use social networking to see what ? Raw skepticism, perhaps, or innate curmudgeonliness. Anyone who does facebook can get pulled into the undertow of nostalgia, can reconnect with people who have changed so much during the last twenty years that the ties that bind them are frayed with sweetness and false remembrance. I’m not sure why those who live in the present bother with facebook in the first place. My idea of social networking involves real face time: a cup of coffee or a glass of wine, something to eat, a handshake at the end of our time together.

This entry was posted in Social Media. Bookmark the permalink.